Davao del Norte is among the Philippines’ fastest growing provinces, thanks to its abundance of natural resources that bear fruit to world-class, high-quality crops. One of the province’s main export products is the local Cavendish banana, which is sought the world over for its attractive looks and delightful taste. Tagum City, Davao del Norte’s provincial capital, is a first-class city considered to be one of the most attractive to residents. In addition to this, Tagum City is also named as one of the most child-friendly cities in the country.

All of the facts stated above make Tagum City as the perfect location for young couples who want to start their families in the right city. It is also the ideal hometown for growing families with young children, especially those who want to raise their kids in a safe, comfortable, and laidback environment away from all the hustle, bustle, and dangers of the city.

Aside from being child-friendly, Tagum City is also one of the safest and most progressive cities in Mindanao. In fact, it has successfully hosted a number of different national events, including the 58th Palarong Pambansa last May 2015.

Location-wise, it will be hard to beat Tagum City as it lies right in the intersection of the three biggest thoroughfares in the entire island of Mindanao, namely: the Davao-Bukidnon Road, the Phil-Japan Friendship Highway, and the Davao-Mati-Agusan Road. The city also shares a border with the bountiful Compostela Valley, while the southern tip of Tagum directly faces the Davao Gulf. Tagum City residents also enjoy close proximity—as well as convenient access—to major Mindanaoan regions, including Davao City, Butuan City in Agusan del Norte, Mati, and the Davao Oriental and Surigao provinces. This strategic location opens up Tagum City for a number of trade and commercial activities, and makes it a popular tourism destination for local and international travelers as well.

One of the best things about a child-friendly city like Tagum is the number of topnotch educational institutions that residents can conveniently access, including the Liceo de Davao College, Saint Mary’s College of Tagum City, Aces Tagum College, Queen of the Apostles College Seminary, the North Davao College Tagum Foundation, the University of Mindanao Tagum City, Arriesgado College Foundation, AMA Computer College Tagum City campus, STI Tagum City campus, the University of Southeastern Philippines, and the Tagum Doctors College, Inc. All these schools are within close walking, driving, or commuting distance from the Suntrust Palm City community.

Tagum City is also among the first cities in the Mindanao region to be home to business processes outsourcing (BPO) companies, such as Siblings Solutions and Sutherland Global Services which are conveniently located a stone’s throw away from the Suntrust Palm City community. 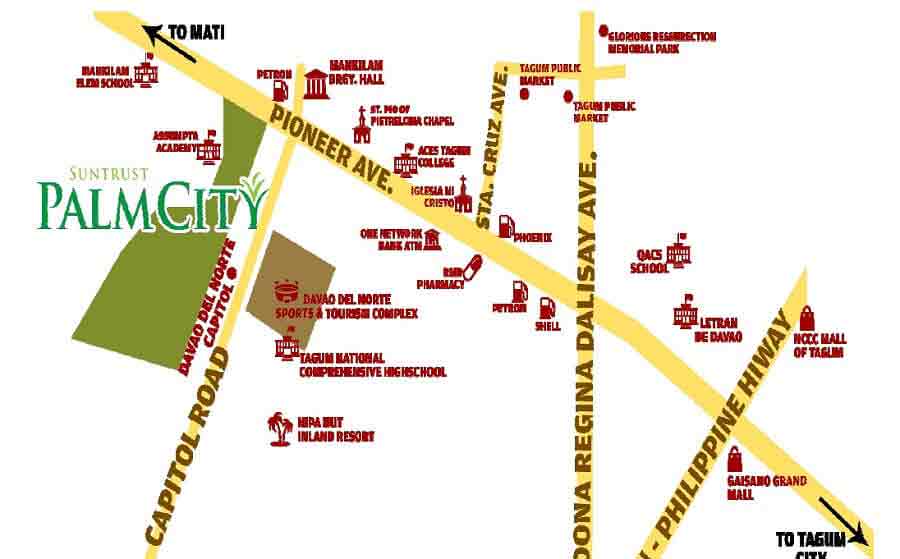